On the side of the road in Grand Teton National Park, a bull moose and a dog engaged in a stare-down.

Photographer Guillermo Esteves had been hoping simply to snap a picture of the moose, but couldn't resist capturing this tense moment on camera. The car's owner — and furry co-pilot — were forced to wait until the moose lost interest and moved off the road.

Esteves' image is among the most popular wildlife photos of 2020.

Each year, the Wildlife Photographer of the Year contest offers a peek into the lives of species around the world. The competition is developed and produced by the Natural History Museum in London. It aims to award photographers whose work inspires us to consider our place in the natural world and our responsibility to protect it.

This year, photographers from 25 countries submitted 50,000 entries. Contest judges announced a group of winners in October, but now the public gets to choose favorites.

The contest organizers curated a shortlist of front-runners for these people's choice awards. Many of the images — including shots of an endangered Iberian lynx along a highway, a civet cat taking a backpack ride in India, and an animal rescuer caring for orphaned bats in Australia — throw into sharp relief the relationships between animal species and the humans around them.

Voting is open through February 2, after which the winners will be announced.

Below are 20 leading photographs from this year's people's choice awards contest.

Some of this year's leading photos showcase the bond between people and the animals they care for. 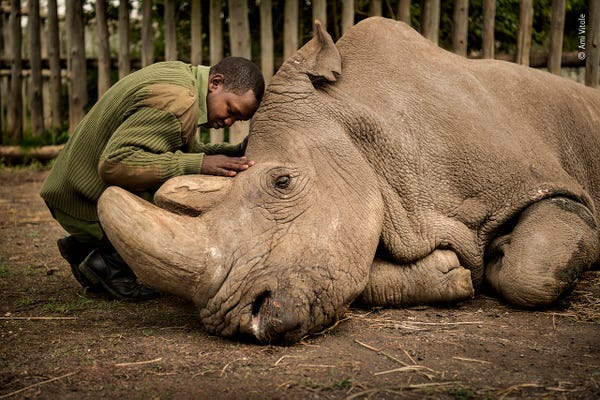 Julie Malherb, the wildlife rescuer and "bat woman" featured in this photo, cares for orphaned flying-foxes. 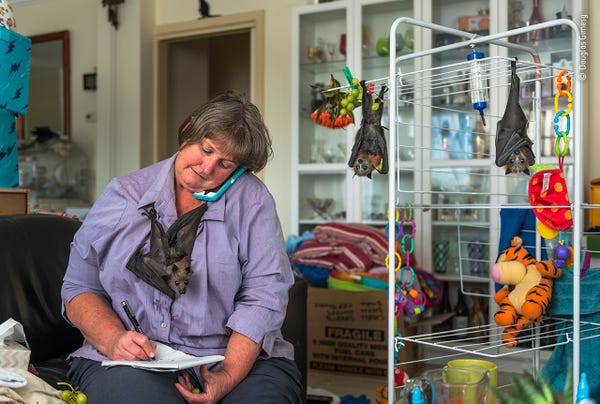 Flying-foxes are bats native to Australia's southeast forests. They were recently listed as vulnerable to extinction due to habitat loss and heat-related mass die-offs — problems exacerbated by the continent-wide bush fires that occurred in January.

The relationship between Russian bear trainer Grant Ibragimov and his animals is more complicated. 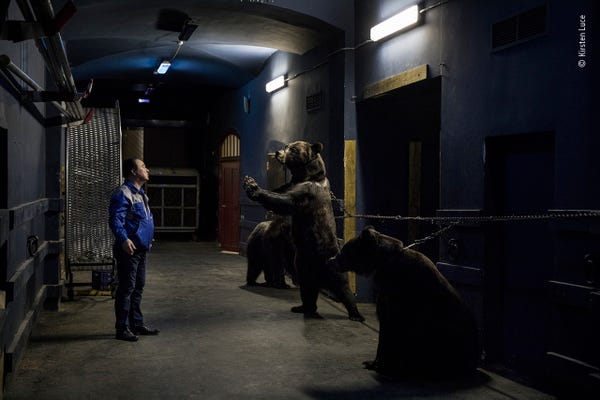 At the Saint Petersburg State Circus, Ibragimov performs a daily act with three Siberian brown bears. The bears are chained by their necks to a wall when they are young to strengthen their leg muscles so that they learn how to walk on two feet, according to photographer Kristen Luce.

This orphaned civet kitten grew up in a remote Indian village, where locals have kept it company. 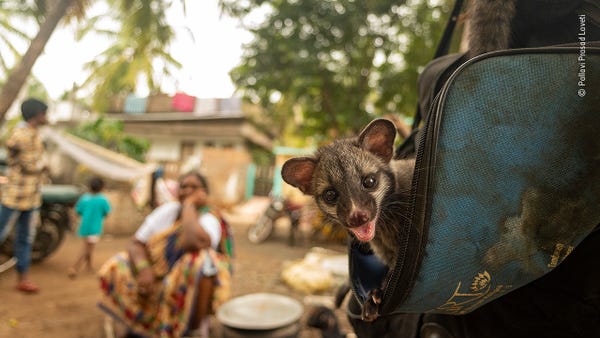 According to photographer Pallivi Prasad Laveti, cat-like civets are often captured and kept in cages at Kopi Luwak coffee production plants. The coffee is made from beans that are partially digested and then pooped out by civets; trapped civets are often force-fed a diet of only coffee beans.

Not all of this year's photos show live animals. 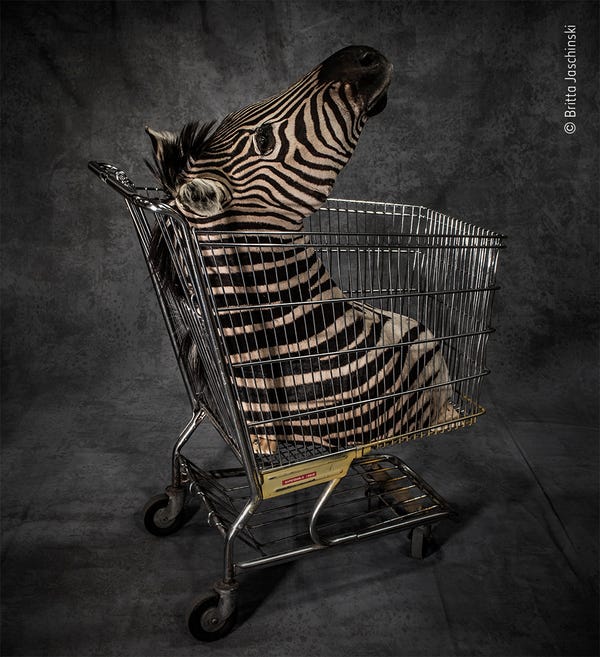 Britta Jaschinski snapped a photo of a confiscated zebra head at a US border checkpoint. Most likely, Jaschinski said, the hunters couldn't show proof they killed this zebra legally.

Humans — drivers, not hunters — also kill lynx like the one pictured here. More than 34 were run over in 2019 near where photographer Sergio Marijuán Campuzano took this shot. 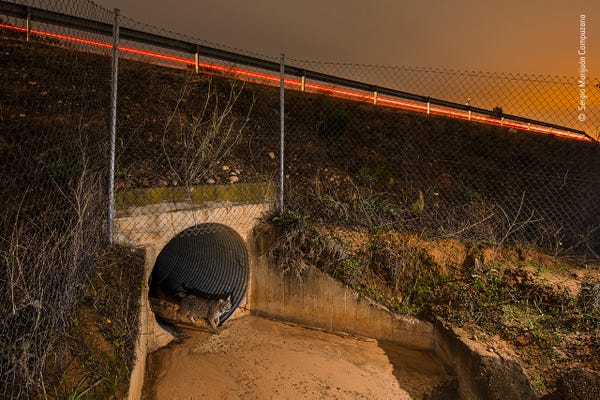 Iberian lynx are endangered and can become casualties of car accidents in places like Jaen, Spain as they try and expand their habitats. However, tunnels under highways and fencing improvements have decreased lynx mortality on the roads.

Some Iberian lynx are thriving, though, like these two kittens, Quijote and Queen. 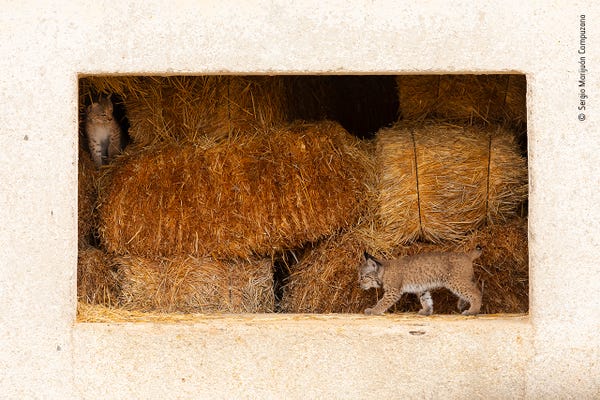 The photo shows the two happily playing in a hayloft. Their mother, Odrina, and grandmother, Mesta, were born in the same hayloft, too.

Many of the frontrunner photos showcase animals going about their regular routines. 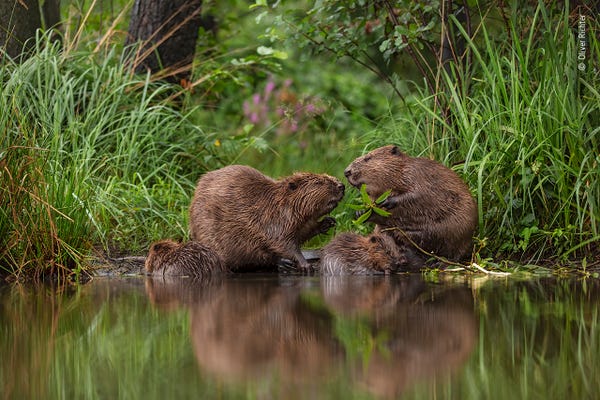 This photo shows two red Eurasian squirrels (one is obscured by his nest buddy) sleeping soundly. 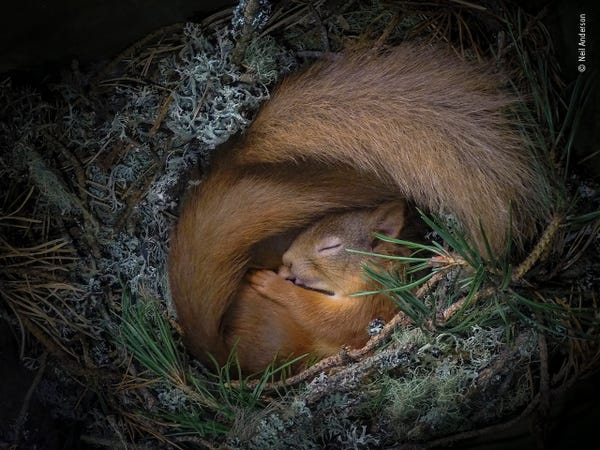 The weather in the Scottish highlands can get chilly, so Neil Anderson put out a box in a pine tree near his home.

Two squirrels chose to make the box their home, and Anderson snapped a picture of them.

Not all animals in the Scottish highlands get so lucky, though. 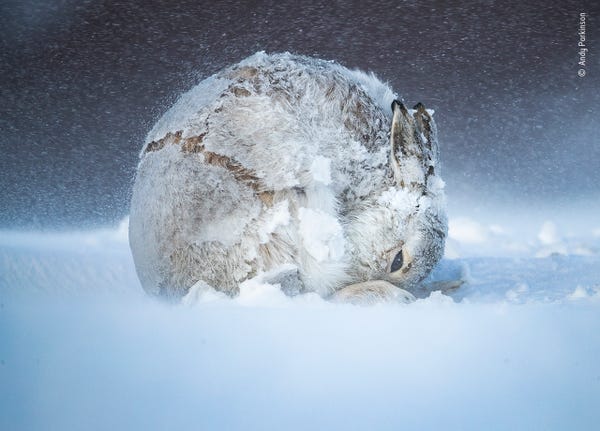 This female mountain hare balled up tight to escape the chill from 60 mph winds near Tomatin. Photographer Andy Parkinson had to wait almost an hour in the freezing cold to capture the shot. 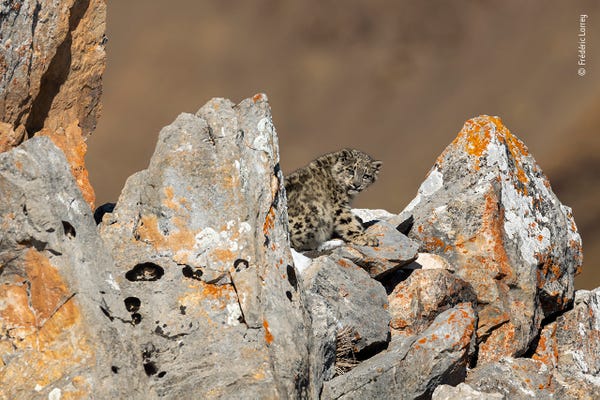 He was able to capture an image of this six-month-old snow leopard cub among the rocks after it stopped following its mother.

Snow leopards aren't the only big cats that climb among the rocks. 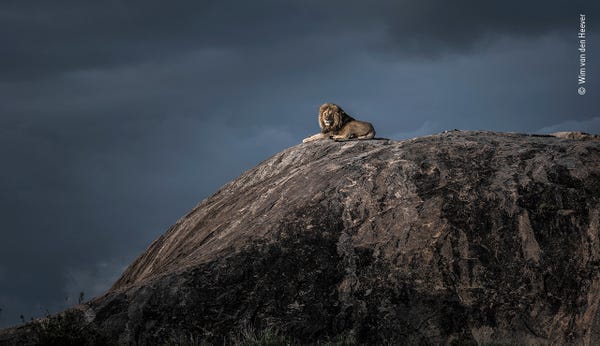 Wim van den Heever snapped a portrait of this male lion atop a large granite rock on the plains of the Serengeti in Tanzania.

Emmanuel Rondeau got a pleasant surprise when he found a shot of this curious takin among the photos in his camera trap high in the Bhutanese mountains. 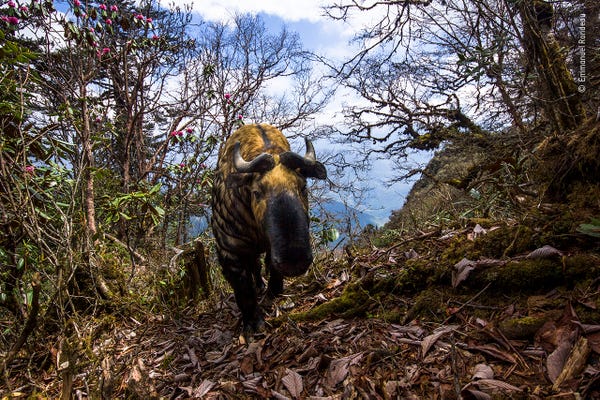 Takins are also known as goat antelope. They can leap nimbly from rock to rock and are well-equipped to deal with the high altitude and cold of the Himalayas.

This photo of a coconut octopus shows how the eight-armed swimmers are smart and resourceful. 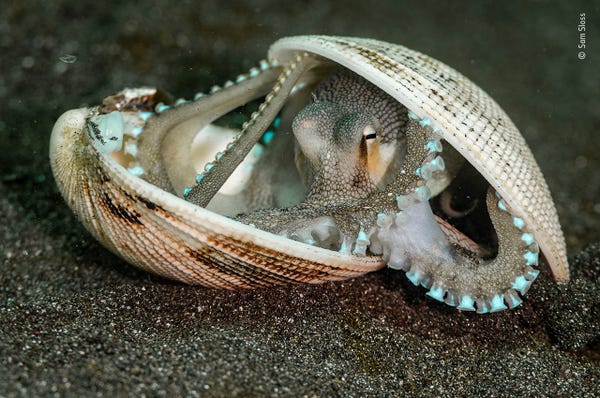 At the bottom of the Lembeh Strait in Sulawesi, this octopus was carrying its house made of shells when Sam Sloss took its picture. Some coconut octopuses use clam shells, coconuts, and even glass bottles to take shelter or conceal themselves from predators and prey.

This swimmer makes no attempt to hide. 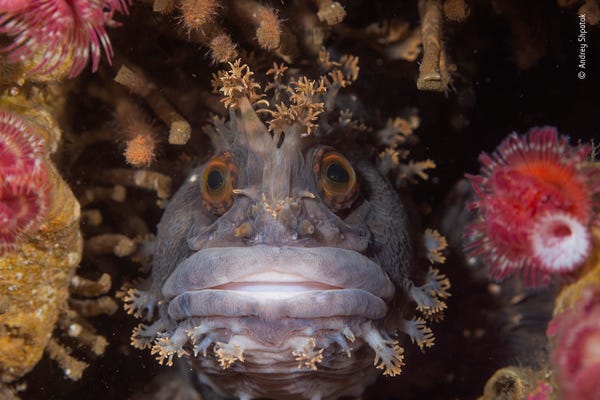 Japanese warbonnets like this one, photographed off the coast of Japan, often swim right up to divers. The fish use sharp-edged jaws to snap up and swallow sea cucumbers and gastropods. 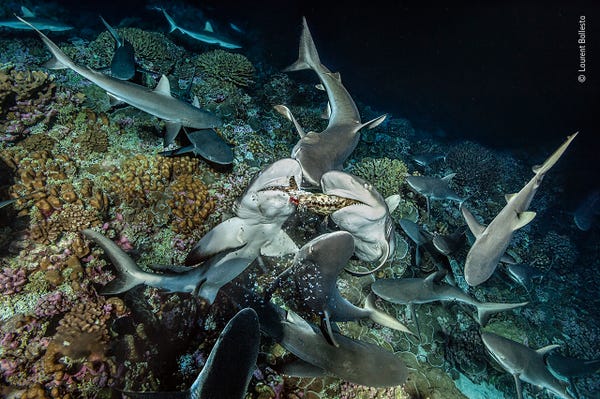 This photo shows two sharks munching on grouper fish flesh in French Polynesia. These predators hunt in packs but do not share their prey. 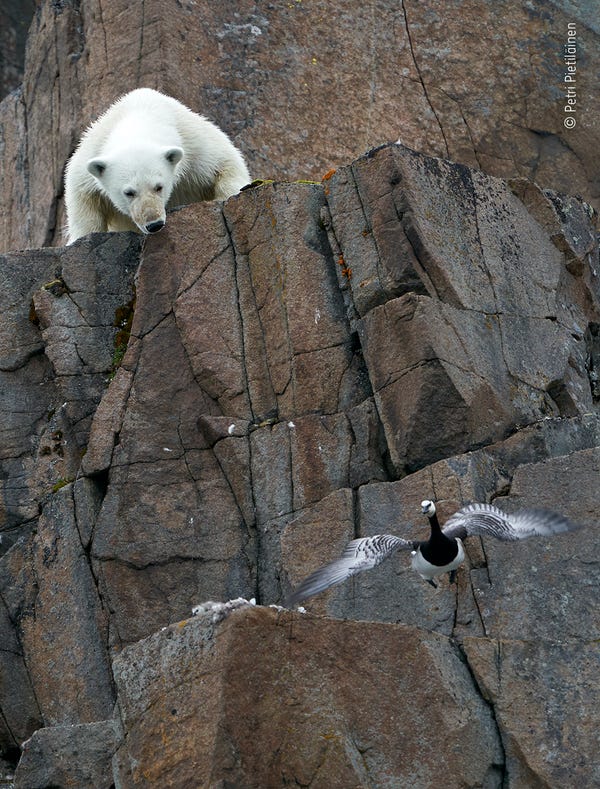 According to photographer Petri Pietiläinen, this bear had a hard time making its way down the steep cliff to reach the geese nesting below.

Some geese and their chicks jumped off the cliff, but the bear fed on the animals that remained behind.

Some animals aren't bothered by proximity to people, and even take advantage of it. 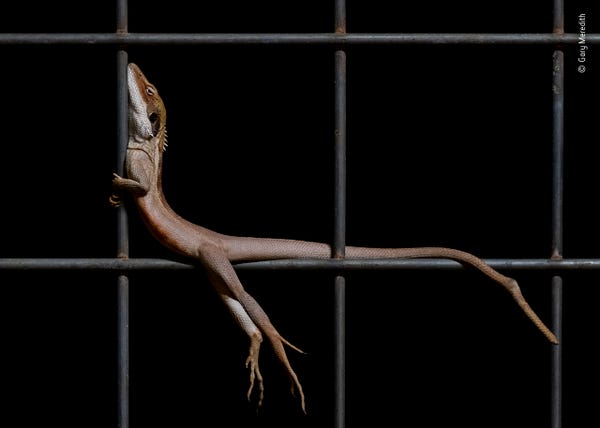 Long-nosed dragons lounge on the wire mesh outside mining workshops in western Australia's Great Sandy Desert. That way, the lizards can easily catch some sun and munch on the insects attracted to the workshops' artificial lights.

Burrowing owls like these love to take up residence in meticulously manicured lawns on Florida's Marco Island. 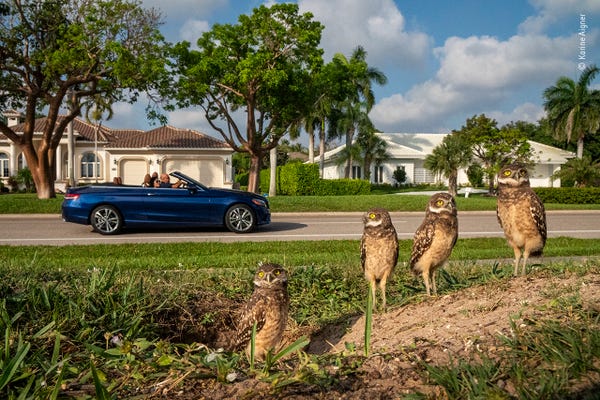 The owls dig holes into the yards of luxury resorts and multimillion-dollar homes, where they hunt for insects and lizards.

California, too, is home to burrowing owl families. 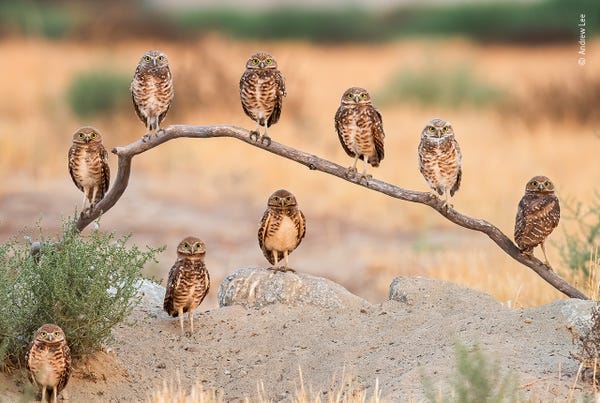 These owls live in the urban sprawl of Ontario, California. Photographer Andrew Lee had to wait several days to get the entire family — two parents and their eight chicks — on film.