Many cancer survivors are at a higher risk of hospitalisation and dying from influenza for at least a decade after their diagnosis, a study has found.

Influenza and coronavirus are both epidemic respiratory viruses, and the researchers warn that cancer survivors are likely at higher risk of severe COVID-19 as well.

There are more than two million cancer survivors in the UK. The team said that their findings suggest that this group may need priority for both flu and COVID vaccines. 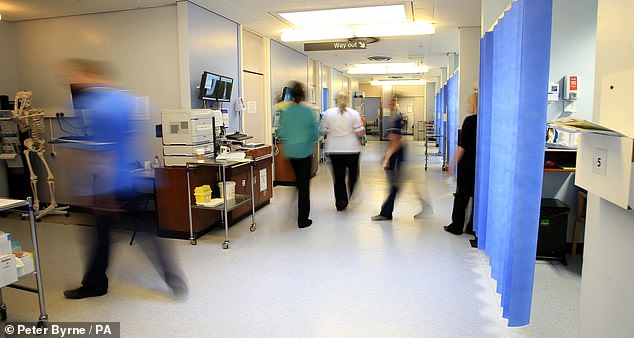 Many cancer survivors are at a higher risk of hospitalisation and dying from influenza for at least a decade after their diagnosis, a study by a British team has found

‘We knew that people with cancer are at high risk of severe outcomes from these epidemic viruses soon after diagnosis, but we found that this increased risk also continues for several years after diagnosis,’ said paper author Helena Carreira.

‘This means that vaccination and other preventative strategies are important considerations for the much broader population of longer-term cancer survivors,’ the London School of Hygiene and Tropical Medicine epidemiologist added.

In their study, Dr Carreira and colleagues compared the rates of hospital admission from the flu — as well as the likelihood of death from the same — between those who had survived cancer for at least one year and the cancer-free population.

They found both outcomes were some nine time more common among survivors of lymphomas, leukaemia, and multiple myeloma than in patients with no prior signs of cancer — with the increased risk last for at least 10 years after cancer diagnosis.

The team noted, however, that the absolute risk of developing a severe bout of influenza remains relatively low among survivors of these forms of cancer — with only around one in 1,000 such individuals admitted to hospital with flu each year.

The researchers found that survivors from other types of cancer also had more than double the risk of severe flu outcomes for up to five years from their diagnosis.

These findings persisted even after accounting for other suspected risk factors such as body mass index, old age, socioeconomic status, smoking and other illnesses.

The team also determined that cancer survivors were more likely to have other diseases associated with an increased risk of severe COVID-19 outcomes — such as diabetes and heart, kidney or respiratory diseases.

Current guidance on who should be considered vulnerable to coronavirus is largely based on policies developed for previous epidemic respiratory viruses — such as the flu — the researchers said.

In such guidance, cancer survivors who have not had recent immunosuppressing treatments are not considered high-risk.

‘These findings have an immediate relevance as we enter the winter period. We have a flu vaccine available, and the likelihood of a COVID-19 vaccine in the near future,’ said paper author and epidemiologist Krishnan Bhaskaran, also of LSHTM.

‘Understanding how vaccination should be prioritised to protect the most vulnerable will be crucial over the next few months,’ he added.

The researchers cautioned that there study has limitations — including that it is not certain that risk factors for severe flu will have the same associations with COVID-19, and that there was a lack of data on the treatments that the patients received.

The full findings of the study were published in the journal EClinicalMedicine.

THE FLU SHOT — THE FACTS

It is a myth that the flu shot can give you the flu.

‘There isn’t any live virus in the influenza vaccine so it’s impossible to get the flu from the vaccine,’ said Dr Tosh from the Mayo Clinic.

‘There was a live vaccine that’s not available any more, but it was impossible to get the flu from that too,’ he added.

CDC officials insist it is not too late to get the flu shot, despite evidence that this year’s vaccine is only 30 percent effective against H3N2.

The H3N2 strain of the virus has so far killed 85 adults and 20 children in the US.

Health officials say that the vaccine could be even more valuable now since it is more effective against strains which are only just emerging – including the H1N1 strain and various B viruses.

CDC figures show the majority of Americans do not get the flu shot and more and more parents are refusing to vaccinate their children.