Diet Coke could be just as bad for you as full fat: Artificially sweetened drinks and sugary beverages BOTH increase the risk of heart disease by up to 20%

Diet drinks are just as bad for your heart as the full-sugar versions, a study has found.

French researchers tracked more than 104,000 people over ten years, looking at how many sugary or sugar-free soft drinks they consumed.

They found the consumers of both sugary and artificially sweetened drinks are up to  20 per cent more likely to suffer heart disease, stroke or heart attacks than those who avoid soft drinks. 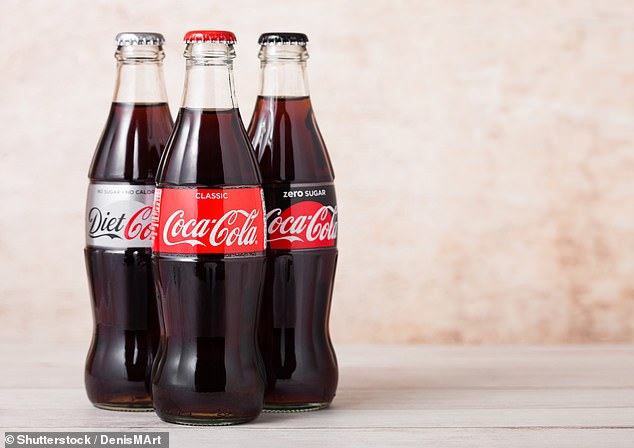 Researchers found the consumers of both sugary and artificially sweetened drinks are up to 20 per cent more likely to suffer heart disease, stroke or heart attacks than those who avoid soft drinks

The scientists, at Sorbonne University in Paris, split people into three groups based on their consumption of sweetened beverages.

These categories were labelled as non-consumers, low consumers and high consumers and drinks split into either artificially sweetened or sugary.

A sugar content equalling or exceeding five per cent meant it was considered sugary whereas a sub-five percentage and the presence of ‘non-nutritive sweeteners’ was enough to be classified as an artificially-sweetened beverage.

A decade of records from 2009 to 2019 looked for any relationship between intake and heart-related issues, such as stroke, transient ischemic attack (TIA), myocardial infarction, acute coronary syndrome and angioplasty.

Married couples vow to share everything, and new research has found this involuntarily stretches to their heart health.

A study of more than 5,000 US-based couples found that in 79 per cent of relationships, both people fall into the ‘non-ideal’ category for heart health.

On average, couples also share the same risk factors which can make events such as a stroke or heart attack more likely.

This is due to both people falling into an unhealthy routine with poor diet and inadequate levels of exercise.

It revealed people who drank lots of low-sugar diet drinks had the same elevated heart disease risk as those who drank the full-sugar versions.

People who are considered to be high consumers of either artificially sweetened or sugary drinks were 20 per cent as likely to suffer heart problems than people who avoided both types of soft drinks, sticking to other options such as water, tea or coffee.

There was no difference between the two types of drink.

Diet drinks such as Diet Coke, and the artificial sweeteners they contain, are often marketed as a way of reducing calorie and sugar intake.

But experts are concerned at growing evidence that artificial sweeteners alter the body’s metabolism, increasing the speed at which sugar is absorbed.

Lead author Eloi Chazelas concluded: ‘Higher intakes of sugary drinks and artificially sweetened beverages were associated with a higher risk of cardiovascular diseases, suggesting that artificial sweeteners might not be a healthy substitute for sugary drinks.’

‘These data provide additional arguments to fuel the current debate on taxes, labeling, and regulation of sugary drinks and artificially sweetened beverages.’

‘To establish a causal link, replication in other large-scale prospective cohorts and mechanistic investigations are needed.’