SpaceX and NASA made history on Sunday when a toasted, gumdrop-shaped spaceship splashed into the Gulf of Mexico.

The Crew Dragon capsule — designed by SpaceX with funding from NASA — was returning astronauts Bob Behnken and Doug Hurley to Earth after an unprecedented mission to the International Space Station. It was the first time a private company had taken humans into space.

But this was just a demonstration mission. Its success tees NASA up to ferry astronauts regularly to and from the space station aboard the Crew Dragon.

"This day heralds a new age of space exploration," Elon Musk, SpaceX CEO, said in a briefing after the splashdown, adding, "I'm not very religious, but I prayed for this one."

Here are the best photos from the launch, the astronauts' time in space, and their fiery plunge back to Earth.

Behnken and Hurley were the first people ever to fly a commercial spacecraft. 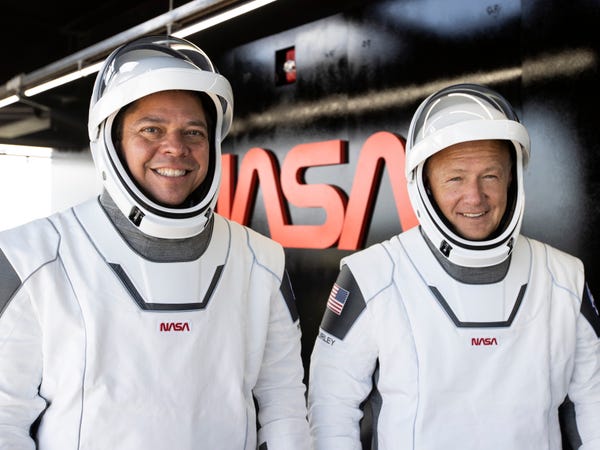 Their mission, called Demo-2, revived the US's ability to launch and fly its own astronauts, which it lost after the Space Shuttle program ended in 2011. 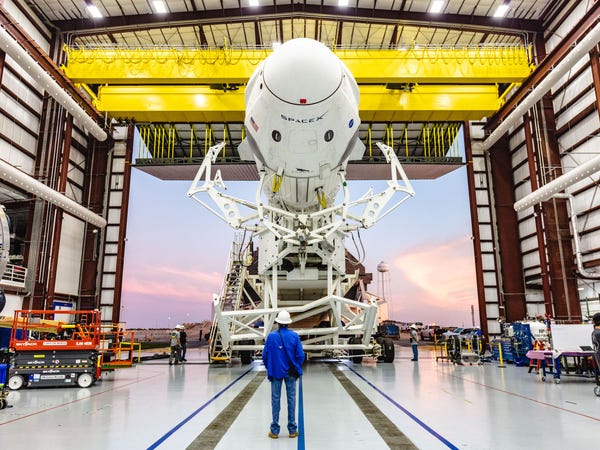 For the last nine years, NASA relied on increasingly expensive Russian Soyuz rockets to ferry its astronauts to and from the space station

On May 30, Behnken and Hurley climbed into the Crew Dragon and launched into space atop one of SpaceX's Falcon 9 rockets. 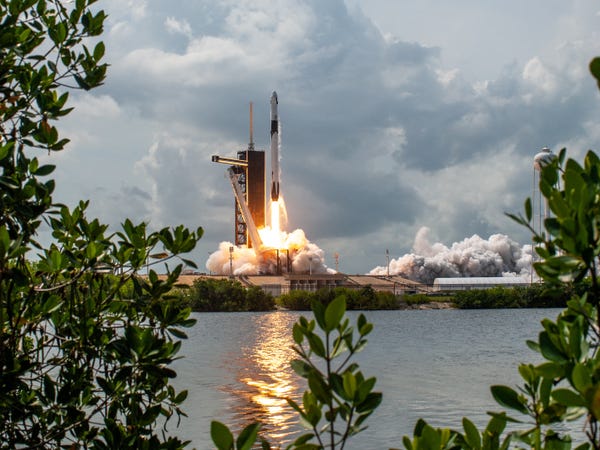 They had first attempted the launch three days earlier, but cloudy weather made it unsafe for the rocket to fly. 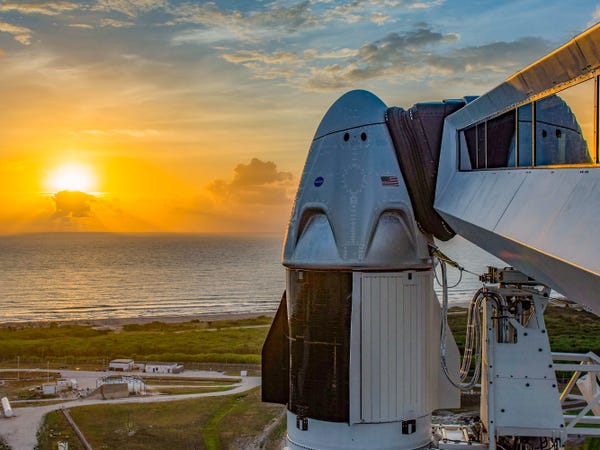 On both launch days, the astronauts were helped into their spacesuits at NASA's Kennedy Space Center in Florida. 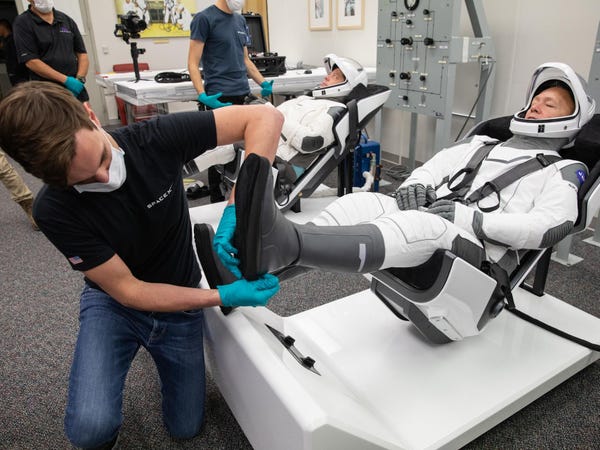 The men said goodbye to their families. Both are married to astronauts, and they each have a young son. 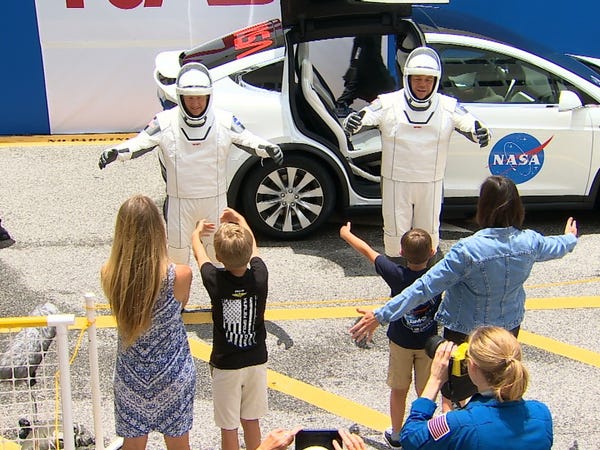 The astronauts couldn't hug their families because they had just spent two weeks in quarantine to ensure they didn't accidentally carry COVID-19 to the space station.

Behnken and Hurley had been working with SpaceX for five years as part of NASA's Commercial Crew Program. 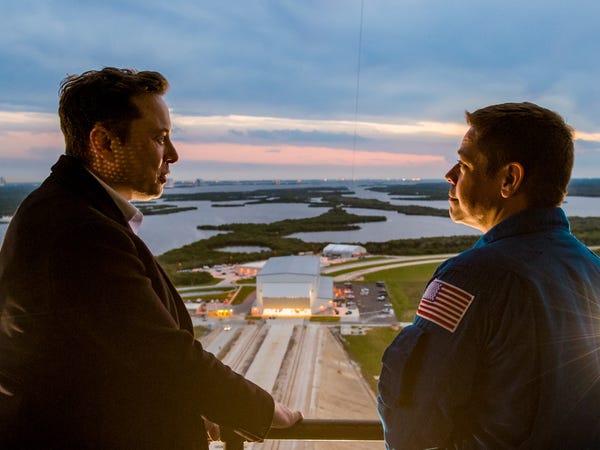 The program is NASA's solution to the void left by the space shuttles . It funded both SpaceX and Boeing to build human-grade commercial spaceships, but SpaceX got to its crewed flight first.

In a press briefing ahead of the launch, Behnken told Business Insider that he and Hurley had gained more insight into the ways the mission could fail "than any crew has in recent history, just in terms of understanding the different scenarios that are at play."

Inside Crew Dragon before they launched, NASA's livestream showed the astronauts closing their eyes and taking deep breaths as they waited for the final countdown. 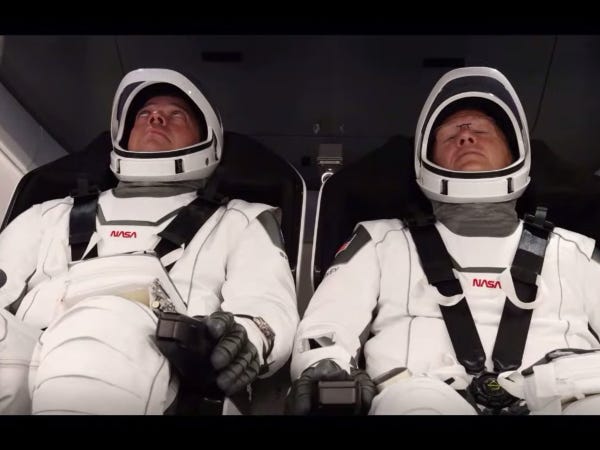 NASA had estimated a 1-in-276 chance that the mission would be fatal. Behnken said that they were "really comfortable" with those odds.

The rocket lifted off at 3:22 p.m. ET, then the Crew Dragon capsule separated from the body of the Falcon 9. 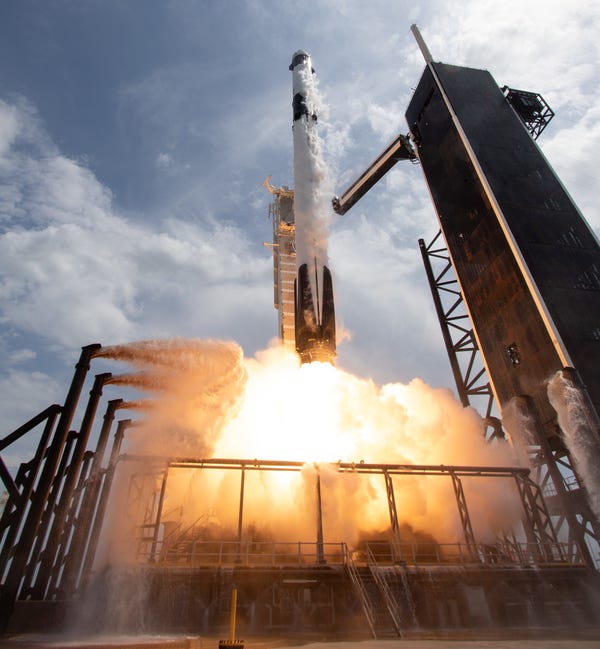 On Earth, teams from SpaceX and NASA celebrated the success. "I'm really quite overcome with emotion," Musk told reporters. 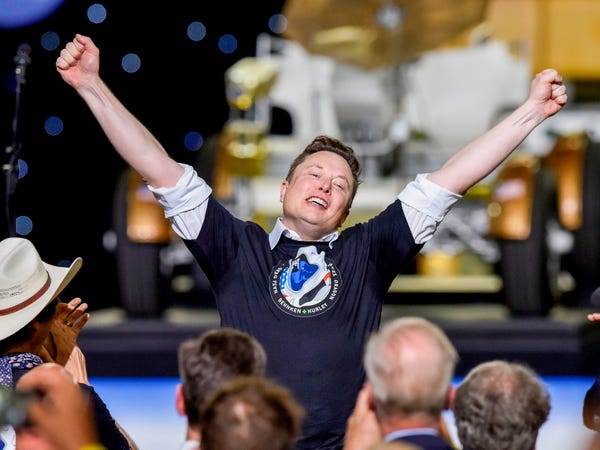 "I've spent 18 years working toward this goal, so it's hard to believe that it's happened," Musk added. "This is hopefully the first step on a journey towards civilization on Mars, of life becoming multiplanetary, a base on the moon, and expanding beyond Earth."

Once they were safely orbiting Earth, Behnken and Hurley named their Crew Dragon capsule "Endeavour" — a tribute to the last space shuttle ever built. 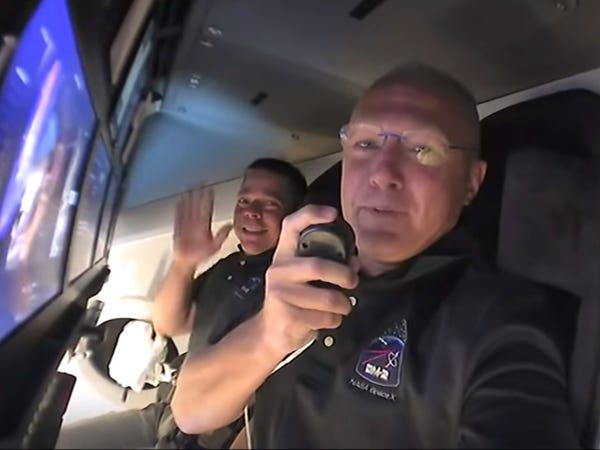 The next day, Endeavour opened its nose cone and docked to the space station. 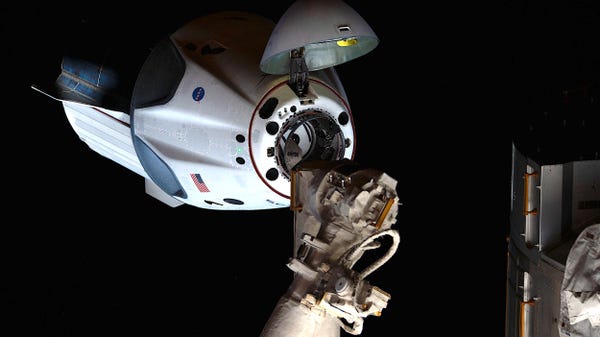 After a hatch-opening procedure that took about two hours, Behnken and Hurley floated onto the ISS. 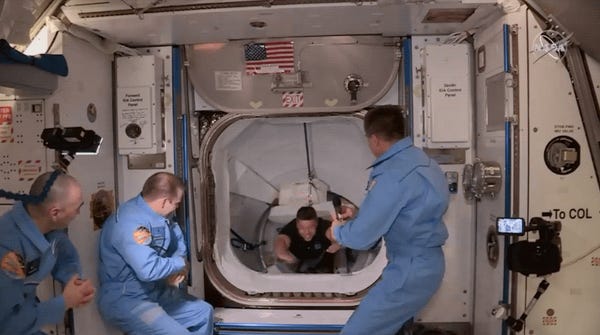 Their new crewmates — NASA astronaut Chris Cassidy and Russian cosmonauts Anatoly Ivanishin and Ivan Vagner — were waiting to welcome them.

Upon arrival, they displayed a trophy for SpaceX: a US flag that the last space shuttle crew left on the ISS. It waited nine years for NASA's next human launch from US soil. 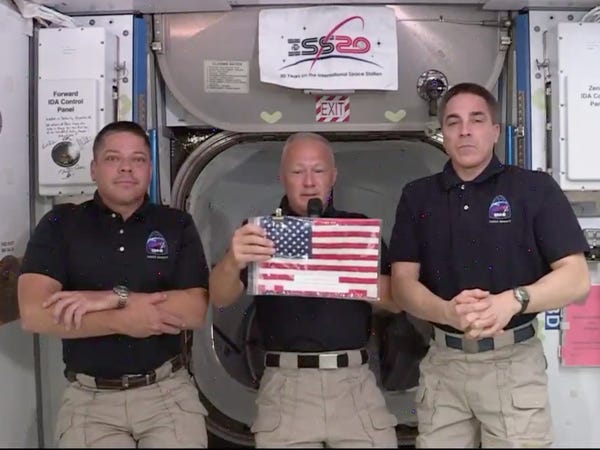 They effectively claimed victory for SpaceX in a game of capture the flag that Barack Obama started when he developed the Commercial Crew Program.

The spaceship remained docked to the ISS for the next two months. It was designed to survive up to 110 days in the harsh environment of space. 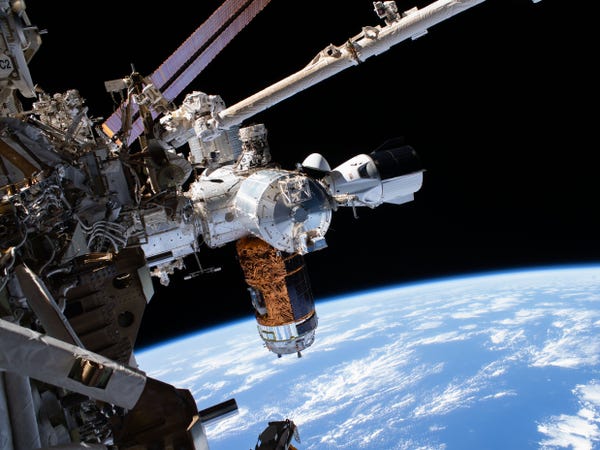 While on the ISS, Behnken and Hurley worked on science experiments that NASA conducts in microgravity. 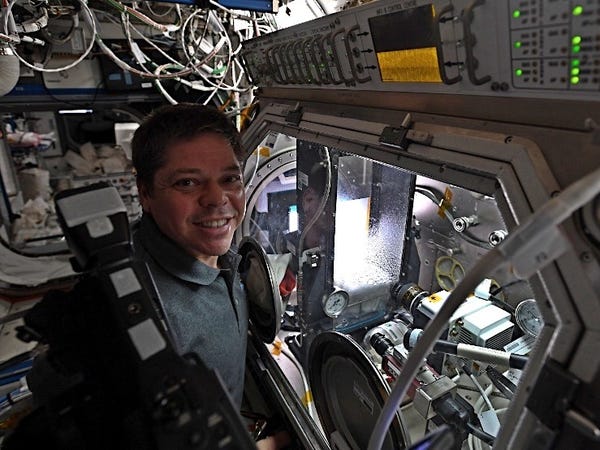 Behnken and Cassidy went on a couple of spacewalks together. 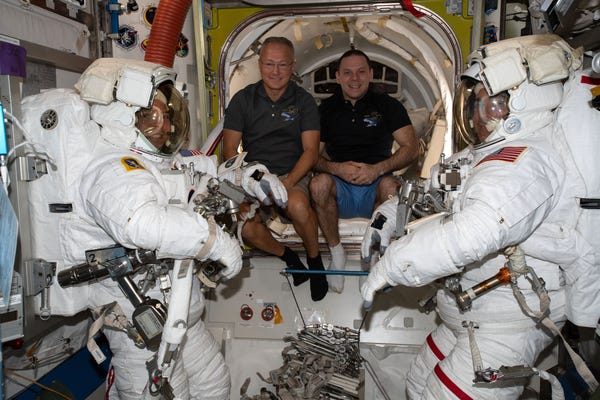 They did routine maintenance outside the station: replacing batteries, installing new equipment, and removing old parts. 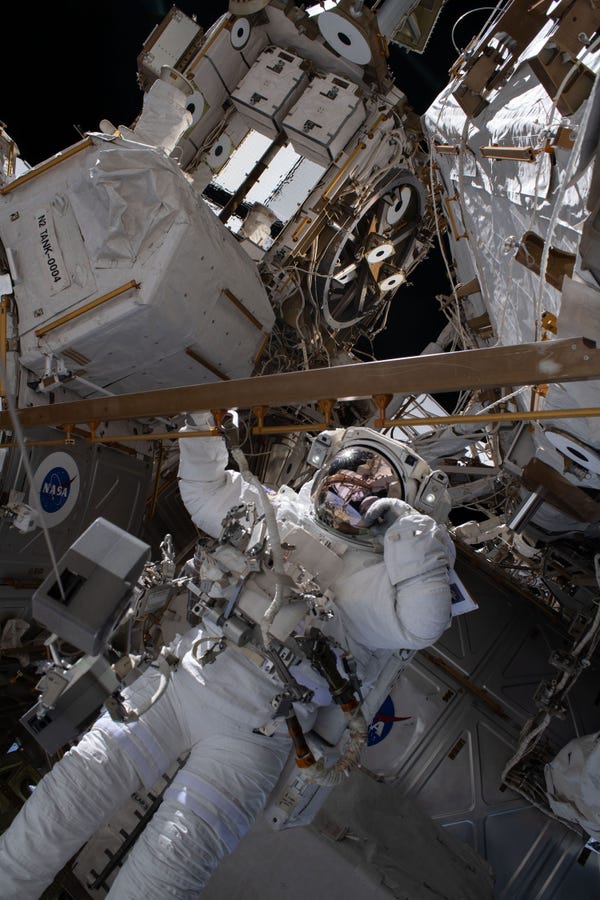 Then came the high-stakes final leg of the Demo-2 mission: coming home. Behnken and Hurley crawled back into the Crew Dragon on Saturday, August 1, and undocked from the space station. 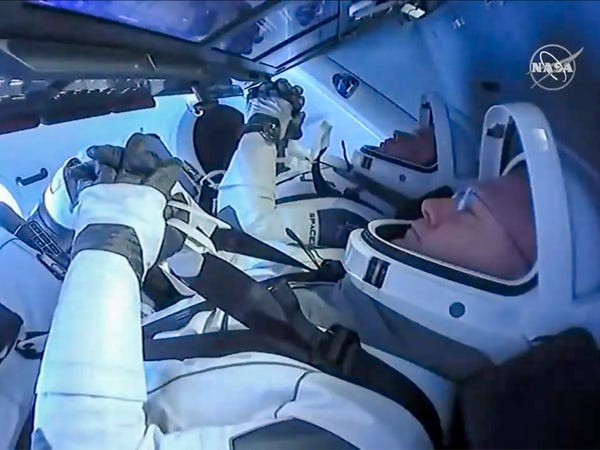 After a night's rest for the astronauts (and several hours of maneuvering the spaceship), the Endeavour capsule fired its thrusters and pushed itself into Earth's atmosphere on Sunday.

Musk had previously said the blistering, 3,500-degree-Fahrenheit plunge through Earth's atmosphere was his "biggest concern." 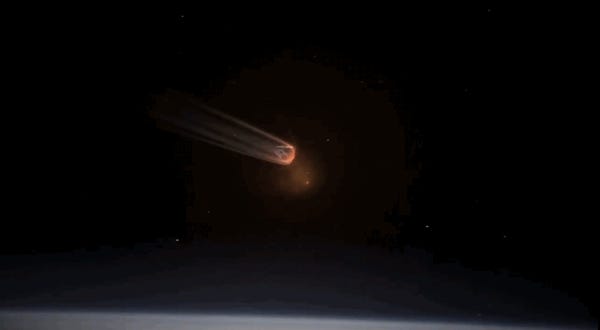 That's because of the capsule's asymmetric design, which is necessary for the emergency-escape system that jettisons the capsule away if a launching rocket fails in midair.

"If you rotate too much, then you could potentially catch the plasma in the super Draco escape thruster pods," Musk told Aviation Week's Irene Klotz in May, a few days before the launch. "We've looked at this six ways to Sunday, so it's not that I think this will fail. It's just that I worry a bit that it is asymmetric on the backshell."

At the end of the astronauts' descent, parachutes slowed the fall. The capsule landed in the Gulf of Mexico at 2:48 p.m. ET on Sunday, off the coast of Pensacola, Florida. 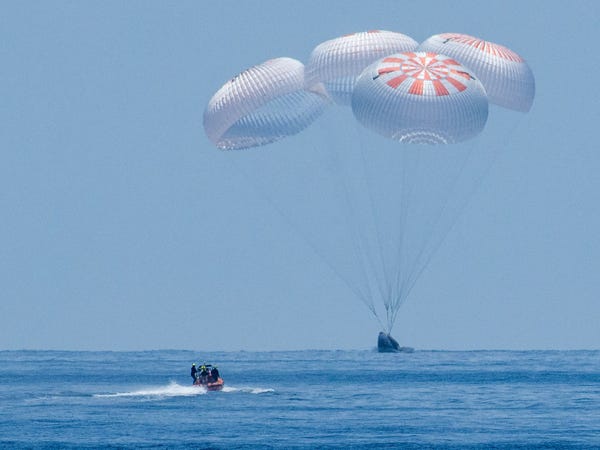 SpaceX and NASA teams in speedboats rushed to recover the capsule and pull the astronauts out — but civilian onlookers in their own boats swarmed the scene, too.

"Maybe next time we shouldn't announce our landing zone," the SpaceX engineer Kate Tice said during NASA's live feed of the landing.

Even cosmonaut Ivan Vagner — the astronauts' former crewmate on the International Space Station — could see the boats speeding toward the capsule from 250 miles above Earth.

In a statement to CBS, the Coast Guard said it warned boaters multiple times ahead of the splashdown with radio alerts and physical warnings, yet lacked an order to legally enforce a hazard zone.

"Numerous boaters ignored the Coast Guard crews' requests and decided to encroach the area, putting themselves and those involved in the operation in potential danger," the statement said.

Some of the boats passed close to the capsule, including one with a passenger waving a Trump flag. NASA officials said this was dangerous for the astronauts and the onlookers.

That's because the Endeavour capsule can be shrouded in poisonous fumes after it plummets through Earth's atmosphere.

The crowd "was not what we were anticipating," NASA Administrator Jim Bridenstine said in a briefing after the splashdown.

"That's not something that is good," he added. "We need to make sure that we're warning people not to get close to the spacecraft in the future."

After clearing away the unauthorized boats, the recovery team lifted the toasted capsule out of the water. 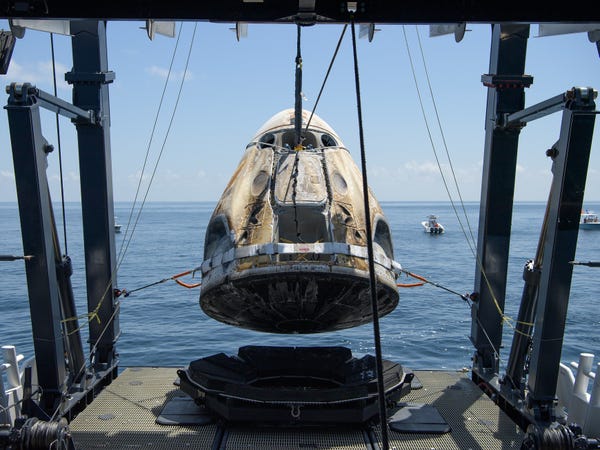 The team picked up a dangerous gas around the capsule called nitrogen tetroxide. They waited for it to clear before opening the spaceship's hatch.

The recovery team then helped Behnken and Hurley out of their seats and onto stretchers — a standard procedure for astronauts post-landing — so they could get immediate medical evaluations. 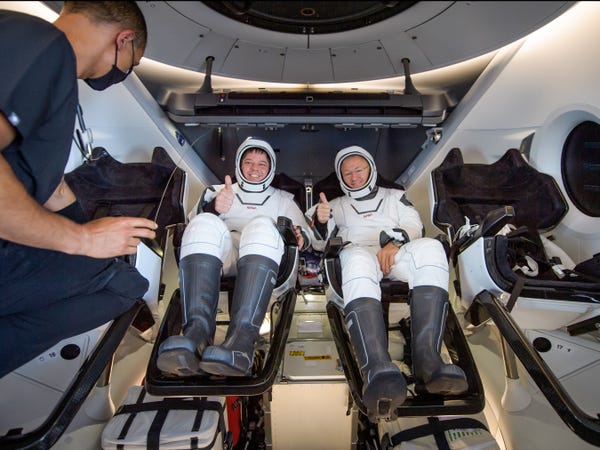 The men were fine but found it difficult to stand after the splashdown. That's normal for ISS astronauts, since their bodies become accustomed to floating in space and suddenly have to work much harder to move against Earth's gravity.

A helicopter took Behnken and Hurley to dry land.

"This has been a quite an odyssey the last five, six, seven, eight years," Hurley told team members and press shortly after the landing. 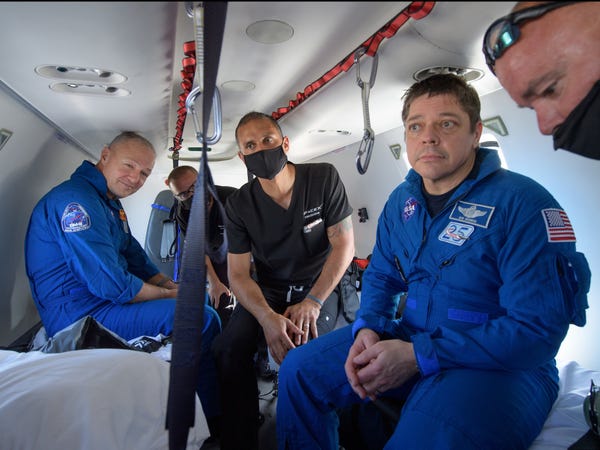 "When the space shuttles retired, when Doug took his final flight to wrap that up, I think it was a sad day for us," Behnken said. "There's something special about having that capability to launch and bring your own astronauts home."