Three Mobile was one of the very first mobile networks to launch unlimited SIM deals and it continues to offer some very competitive deals. Right now, you can get an all-you-can-eat Three SIM for £22 a month with the first six months on offer at half that usual price.

Although that sounds hugely enticing, there’s now a rival deal that also offers unlimited data at a cheaper price. SMARTY has just announced its latest SIM-only plan which will costs customers just £18 per month.

Along with being cheaper, there is another bonus of SMARTY’s SIMs as there’s no long term contract to sign up to and you can leave at any time you like.

YOU CAN FIND THE SMARTY DEAL HERE

As a comparison, to take advantage of Three’s deal you’ll need to commit to 24 months but that’s not the case with the SMARTY offer.

As the firm explains, “the plan comes with unlimited calls and texts; tethering and personal hotspot is included and there are no speed restrictions. There’s no credit check required, no minimum contract or long tie-in as all plans with SMARTY are on a one-month plan. Prices are transparent and customers do not need to worry about hefty bills or nasty surprises at the end of the month.” 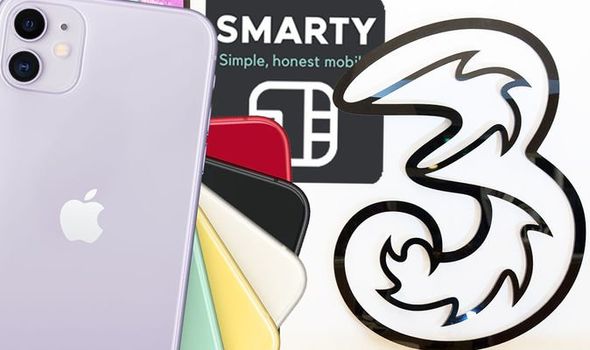 Along with that unlimited SIM, customers can also choose from other plans which include either the value 30GB plan for £10 or 50GB for £15.

It’s worth noting that SMARTY is actually powered by the Three network which means you should get access to 3G and 4G speeds but 5G is not included so don’t expect superfast downloads if you take advantage of this deal.

Of course, Three and SMARTY aren’t the only networks offering unlimited data deals. Vodafone, O2 and EE all now offer the ability to download as much as you like without fear of facing additional charges.

O2’s unlimited pricing starts from £35 per month with EE offering this service with 5G speeds for £35 per month. Finally, Vodafone offers three levels of unlimited data which all include different download speeds. For £22 per month you’ll get 2Mbps, pay £26 and this increases to 10Mbps with the fastest downloads costing £30.

One more thing to remember is that EE has just announced its new Smart Plans which all come with access to 5G data speeds.

And there’s also a new addition that’s sure to go down well with customers.

EE says that Reserve Data will be fast enough to access apps like WhatsApp, Google Maps and Apple Music, so Smart Plan and Smart SIM customers can stay connected with friends and stream music until next months’ data starts again.

You can of course still buy a data pack if you think you’ll need it but these can be expensive and Reserve Data should mean many EE customers simply don’t need to spend any extra money.

This article contains affiliate links, which means we may receive a commission on any sales of products or services we write about. This article was written completely independently, see more details here