Ancient human ancestors feasted on SHELLFISH during times of drought as they migrated from Africa to Arabia 5,000 years ago, study reveals

Prehistoric pioneers moving out of Africa and on to Arabia 5,000 years ago feasted on shellfish as a way to sustain themselves, a new study found.

Archaeologists from the University of York studied fossil reefs near to the now-submerged Red Sea shorelines that marked prehistoric migratory routes.

These routes took our ancestors out of Africa and to Arabia at the end of the Stone Age and the coast offered enough resources to make the journey sustainably.

The research team found that during periods of little rainfall when other food sources were scarce people would turn to crustaceans for sustenance.

The York team focused their study on the remains of 15,000 shells from sea creatures dating back 5,000 years to an arid period in the region. 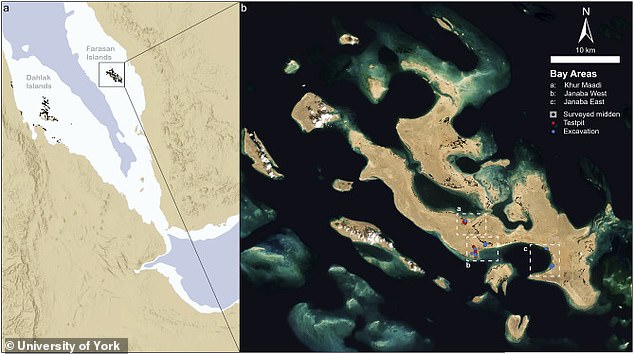 Overview of the Farasan Island where thousands of shell fossils were found by the research team. This map of the southern Red Sea shows black dots indicating the main shell sites. The white rectangles indicate the three research areas where sites have been excavate 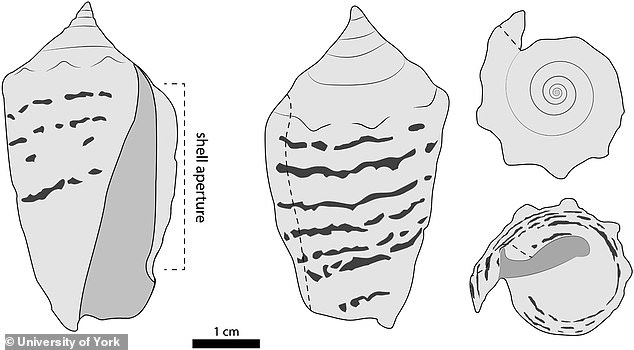 Marine molluscs have been a food source for more than 164,000 years but being able to study patterns and trends have ben hampered by the fact that the areas they were consumed are submerged or have been destroyed by sea-level change.

This led York researchers to find a new way to track the consumption of shellfish.

‘Ecological information on the resilience of intertidal resources is crucial in assessing how attractive they were to past humans as a long-term source of food,’ they wrote.

‘Of particular interest is the southern Red Sea and its function as the southern gateway out of Africa into Arabia during a period of aridity.’ 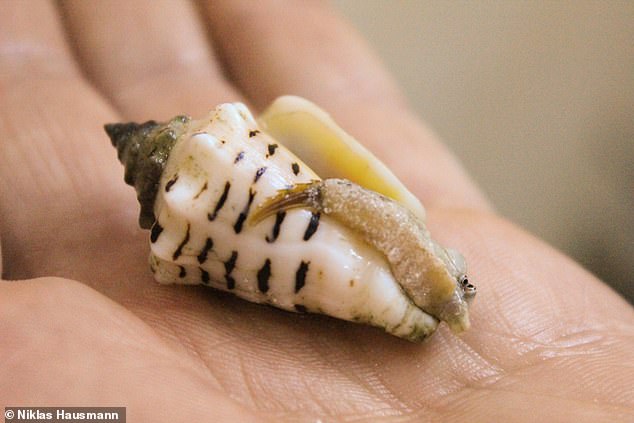 Marine molluscs have been a food source for more than 164,000 years but being able to study patterns and trends have ben hampered by the fact that the areas they were consumed are submerged or have been destroyed by sea-level change 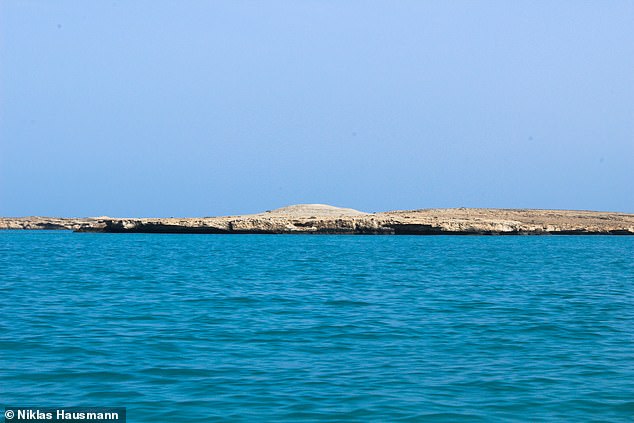 With the coastline of original migratory routes submerged by sea-level rise after the last Ice Age, the team studied shells on the Farasan Islands in Saudi Arabia.

The researchers found that populations of marine mollusks were plentiful enough to allow continuous harvests without any major ecological impacts.

According to lead author, Dr Niklas Hausmann, their plentiful availability would have enabled people to live through times of drought – as was being experienced during this migration about 5,000 years ago.

‘The availability of food resources plays an important role in understanding the feasibility of past human migrations,’ he said.

For example, hunter-gatherer migrations would have required local food sources and periods of aridity could have restricted these movements. 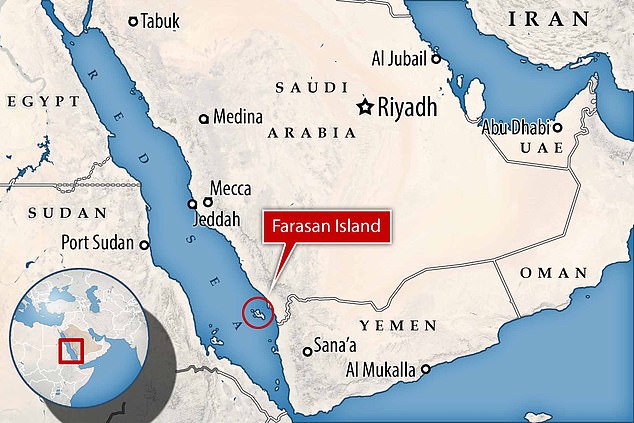 With the coastline of original migratory routes submerged by sea-level rise after the last Ice Age, the team studied shells on the Farasan Islands in Saudi Arabia.

‘Our study suggests that Red Sea shorelines had the resources necessary to provide a passage for prehistoric people,’ Hausmann said.

The team said their findings suggest that shellfish may have been used in much earlier migrations out of Africa.

The southern Red Sea functioned as an important node in the network of human migration through time, most notably during the late Stone Age.

The study also confirms that communities settled on the shorelines of the Red Sea could have relied on shellfish as a sustainable food resource all year round.

It was a time when many other food resources, particularly those on land, were scarce and so people turned to the sea.

‘Previous studies have shown that people of the southern Red Sea ate shellfish year-round and over periods of thousands of years,’ said Hausmann.

‘We now also know that this resource was not depleted by them, but shellfish continued to maintain a healthy population.’ 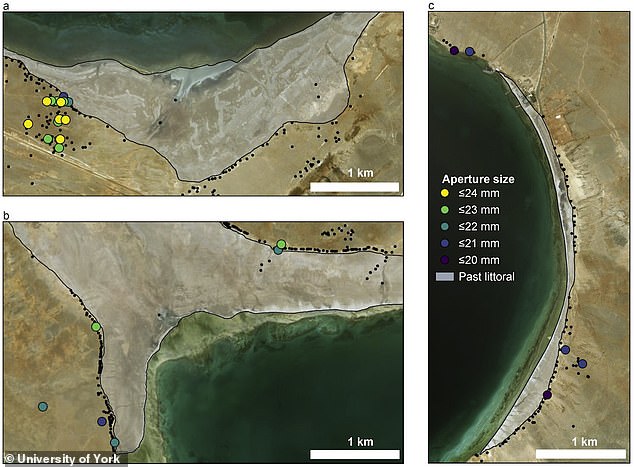 Farasan Bay is shown in these images – including the main areas of this study. Top left is Khur Maadi Bay, bottom left is Janaba West  and right is Janaba East. We indicate the potential size of the near-shore area where shells were found

Southwards view from the area where the shells were found and were ancient humans would have walked on their way to Arabia 5,000 years ago

The southern Red Sea seascape consists of hundreds of islands, scattered along both shorelines together with two major archipelagos, the Farasan Islands and the Dahlak Islands, situated towards the southern end.

The sites in this study are all located on the Farasan Islands, which are on the Arabian side of the Red Sea, about 25 miles off-shore but inter-connected through smaller islands less than a dozen miles apart from each other.

The shellfish species found in the archaeological sites on the Farasan Islands were also found in abundance in fossil reefs dating to over 100,000 years ago.

This suggests that these shellfish have been an available resource over longer periods than archaeological sites previously suggested.

Co-author of the study, Matthew Meredith-Williams, from La Trobe University, said it was important to look at what was happening on land and sea.

‘We know that modelling past climates to learn about food resources is extremely helpful, but we need to differentiate between what is happening on land and what is happening in the water,’ said Meredith-Williams.

‘In our study we show that marine foods were abundant and resilient and being gathered by people when they couldn’t rely on terrestrial food.’

The shorelines of the southern Red Sea are variable and have experienced dynamic shifts and geomorphological transformations in the past.

‘The implications of having a resilient, abundant, predictable and easily accessible coastal resource at one of the important nodes of human mobility – the southern Red Sea – adds an extra dimension to the study of Out Of Africa,’ they wrote.

‘The fact that these resources are also unaffected by arid conditions adds an additional complicating factor to arguments that past dispersal events were limited to periods of greater moisture availability.’

The data showed that even with year round harvesting over long periods, the shellfish beds weren’t negatively impacted.

‘With the data presented here, we start to address the gap in quantifying the potential of marine resources in this key gateway of human dispersal through time,’ the study authors wrote.

‘The shellfish diversity and abundance found in the shell midden datasets indicate a rich ecological environment that is unaffected by the arid conditions of the terrestrial environment, providing sustainable resources to complement a mixed diet.’

The findings have been published in the journal Quaternary International.

DNA AND GENOME STUDIES USED TO CAPTURE OUR GENETIC PAST

Four major studies in recent times have changed the way we view our  ancestral history.

After analysing DNA from 142 populations around the world, the researchers conclude that all modern humans living today can trace their ancestry back to a single group that emerged in Africa 200,000 years ago.

They also found that all non-Africans appear to be descended from a single group that split from the ancestors of African hunter gatherers around 130,000 years ago.

The study also shows how humans appear to have formed isolated groups within Africa with populations on the continent separating from each other.

This examined 483 genomes from 148 populations around the world to examine the expansion of Homo sapiens out of Africa.

They found that indigenous populations in modern Papua New Guinea owe two percent of their genomes to a now extinct group of Homo sapiens.

This suggests there was a distinct wave of human migration out of Africa around 120,000 years ago.

Using genomes from 83 Aboriginal Australians and 25 Papuans from New Guinea, this study examined the genetic origins of these early Pacific populations.

These groups are thought to have descended from some of the first humans to have left Africa and has raised questions about whether their ancestors were from an earlier wave of migration than the rest of Eurasia.

The new study found that the ancestors of modern Aboriginal Australians and Papuans split from Europeans and Asians around 58,000 years ago following a single migration out of Africa.

These two populations themselves later diverged around 37,000 years ago, long before the physical separation of Australia and New Guinea some 10,000 years ago.

Researchers from the University of Hawaii at Mānoa used one of the first integrated climate-human migration computer models to re-create the spread of Homo sapiens over the past 125,000 years.

The model simulates ice-ages, abrupt climate change and captures the arrival times of Homo sapiens in the Eastern Mediterranean, Arabian Peninsula, Southern China, and Australia in close agreement with paleoclimate reconstructions and fossil and archaeological evidence.

The found that it appears modern humans first left Africa 100,000 years ago in a series of slow-paced migration waves.

They estimate that Homo sapiens first arrived in southern Europe around 80,000-90,000 years ago, far earlier than previously believed.

The results challenge traditional models that suggest there was a single exodus out of Africa around 60,000 years ago.