A satellite built in Britain is readying to take the closest ever image of the sun.

ESA’s Solar Orbiter is circling our star and today came within 47 million miles of its surface, around half the distance between the Sun and Earth.

It has equipment on-board specifically designed to take images and measurements of the Sun, experts say, but the ground-breaking image will not be ready until July.

NASA’s Parker Solar Probe, which is also studying the Sun, launched in 2018 and edges even closer to the fiery ball at the centre of the Solar System.

But Parker does not possess telescopes capable of looking directly at the glowing orb.

In December, Parker released a grainy image from 16.9 million miles (27.1 million km) away which captured a coronal streamer belched out from the surface of the star.

However, this did not focus on the surface itself, which the ESA craft will do. 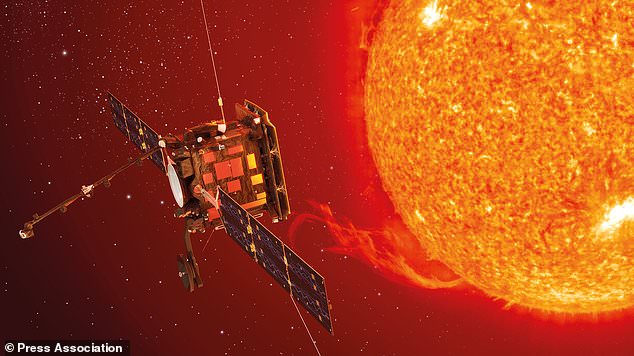 ESA’s Solar Orbiter (pictured, artist’s impression) is circling our star and today came within 47 million miles of its surface, around half the distance between the Sun and Earth. The mage it takes will not be ready until mid-July

ESA scientists will test the spacecraft’s ten instruments, including the six telescopes on-board, this week after perihelion, the closest point to the Sun in its orbit

A combination of the spacecraft’s instruments will combine to give the closest look at the Sun ever, the researchers hope.

The image will not be available until mid-July due to delays in processing the vast amount of data.

ESA’s Solar Orbiter probe will ‘accidentally’ passed through the tails of Comet ATLAS at the end of May.

Scientists switched on four of the spacecraft’s instruments especially to take advantage of this rare opportunity in order to conduct ‘bonus science’.

The encounter with ATLAS was not planned — the Solar Orbiter probe was launched in February to study the sun up-close, with a focus on the star’s polar regions.

The probe collected data on the separate trails of dust and charged particles released from the comet as it is slowly vaporised by the solar radiation from the Sun.

‘We have never taken pictures of the sun from a closer distance than this,’ said Daniel Muller, ESA’s Solar Orbiter project scientist.

‘There have been higher resolution close-ups, e.g. taken by the four-metre Daniel K Inouye Solar Telescope in Hawaii earlier this year.

‘But from Earth, with the atmosphere between the telescope and the sun, you can only see a small part of the solar spectrum that you can see from space.’

The test is being carried out to prove that Solar Orbiter’s telescopes are ready for future scientific observations.

Other instruments will also provide an insight into the environment around the spacecraft, such as the magnetic field and the particles making up the solar wind.

It comes as Solar Orbiter begins its cruise phase, which will last until November 2021.

After this, it will enter the main science phase, getting as close as 26 million miles to the sun’s surface – beyond that of Mercury, the closest planet to orbit the sun.

‘We have a nine-hour download window every day but we are already very far from Earth so the data rate is much lower than it was in the early weeks of the mission when we were still very close to Earth,’ Mr Muller continued.

‘In the later phases of the mission, it will occasionally take up to several months to download all the data because Solar Orbiter really is a deep space mission.

‘Unlike near-Earth missions, we can store a lot of data on board and downlink it when we are closer to home again and the data connection is much better.’

Space Orbiter was constructed by Airbus in Stevenage and blasted off from Nasa’s Cape Canaveral site in Florida on February 10.