Spice up your life! Just one teaspoon of spice mix containing coriander, thyme, cumin and parsley in your meal could counteract some of the harm from high-fat meals

Spicing up your dinner with coriander, cumin, thyme and parsley counteracts some of the harmful effects of high-fat meals, according to a new report.

Adding even one teaspoon of spice mix to a recipe can have anti-inflammatory benefits, reducing the risk of cancer, diabetes or heart disease.

In experiments, US researchers found people who ate a meal high in fat and carbs with just six grams of spice had lower inflammation markers in their blood.

Even high-fat meals such as burgers, fried chicken and oil-based curries have less of a detrimental effect on the body if they’re piled with spice, the study suggests.

The findings are good news for fans of spicy meals who struggle to find the time or motivation to exercise or don’t like healthier foods. 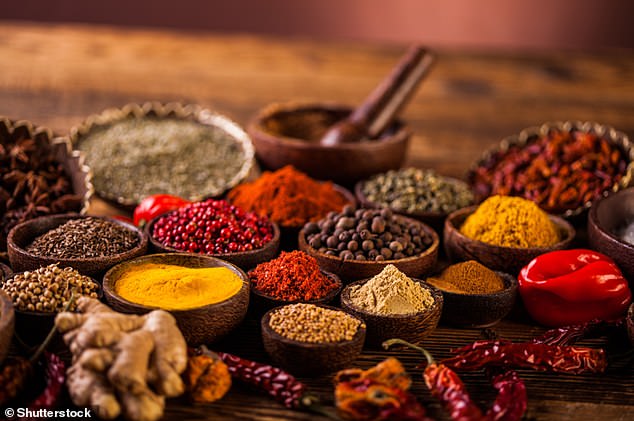 When participants ate a meal high in fat and carbohydrates with six grams of a spice blend added, the participants had lower inflammation

‘If spices are palatable to you, they might be a way to make a high-fat or high-carb meal more healthful,’ said associate professor Connie Rogers from Penn State University in the US.

For their experiments, the Penn State researchers used the following blend of herbs and spices:

Black peppercorns – The fruit of the Piperaceae family of flowers

Coriander – Versatile and flavoursome herb. Referred to as ‘devil’s herb’ by some, as a genetic variation reportedly makes it taste like soap. Roots and stems and just as flavourful as the leaves.

Cumin – Seeds from the Apiaceae plant, giving a distinctive spicy aroma to curries and chillis.

Parsley – Flat or curly with a fresh grass-like flavour

Red pepper– either chilli or bell, including chilli powder and paprika, which is dried and crushed apsicum

‘We can’t say from this study if it was one spice in particular, but this specific blend seemed to be beneficial.

‘Ultimately the gold standard would be to get people eating more healthfully and to lose weight and exercise, but those behavioural changes are difficult and take time.

‘So in the interim, we wanted to explore whether a combination of spices that people are already familiar with and could fit in a single meal could have a positive effect.’

For their study, Penn researchers recruited 12 men, all non-smokers between the ages of 40 and 65, who were overweight or obese.

The men also had at least one risk factor for cardiovascular disease, such as hypertension, an inactive lifestyle, high cholesterol or family history.

The research team draw blood samples before and after each meal hourly for four hours to measure the presence of inflammatory markers – biological characteristics that can appear as a result of harmful stimuli.

Inflammatory markers – such as C-reactive proteins and the enzyme myeloperoxidase – can be helpful in diagnosing specific diseases or for monitoring disease activity. 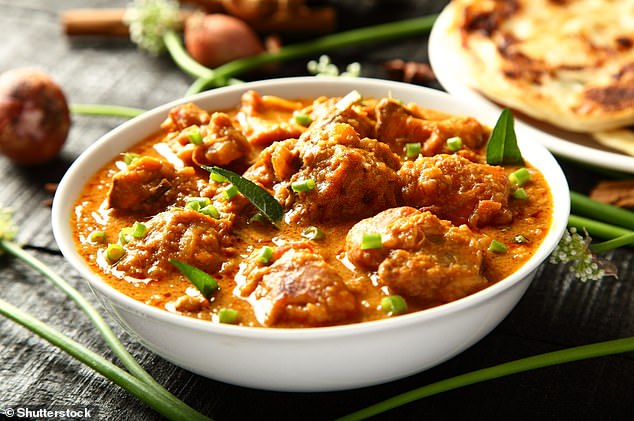 Even high fat meals such as carb-heavy or oil-based curries have less of a detrimental effect on the body when full of spices, the study suggests

The research team also cultured the white blood cells, taken from the blood samples, in the lab, so they produced cytokines – proteins secreted by cells of the immune system.

‘Additionally, we cultured the white blood cells and stimulated them to get the cells to respond to an inflammatory stimulus, similar to what would happen while your body is fighting an infection,’ Rogers said.

‘We think that’s important because it’s representative of what would happen in the body – cells would encounter a pathogen and produce inflammatory cytokines.’

Analysis showed inflammation was reduced after eating a meal with six grams of spices, compared to food with just two grams or no spice at all.

Six grams is roughly equivalent to between one teaspoon and one tablespoon, depending on how the spices are dehydrated, the team said.

Additionally, the level of stimulated white blood cells was reduced by a whopping 1314 per cent 240 minutes after the meal containing six grams of spice mix was consumed, signifying a lower immune response.

It was uncertain which of the 13 herbs and spices contributed to the effects or how exactly the mix lowered levels of inflammatory markers. 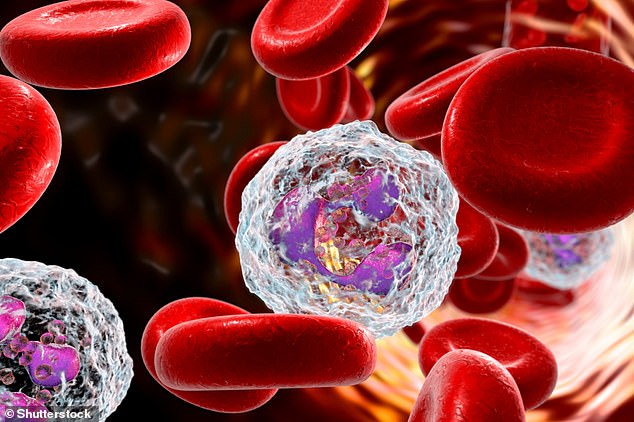 White blood cells, taken from the blood samples, were also cultured so they produced cytokines — proteins secreted by cells of the immune system

In another experiment using the same subjects, six grams of spices resulted in a smaller post-meal reduction of ‘flow mediated dilation’ in the blood vessels – a measure of blood vessel flexibility and sign of good blood vessel health.

The research team will work on future studies to determine the effects of spices in the diet across longer periods of time with a more diverse population, as the study only included middle-aged men.

In previous studies, scientists have found inflammation can spike after a person eats a meal high in fat or sugar.

It’s not clear whether these shorts bursts – known as ‘acute inflammation’ – can cause the more serious long-term ‘chronic inflammation’, which can actually easier to miss.

Professor Rogers said the short bursts play a factor in chronic inflammation, especially for people who are overweight or obese.

The study findings have been published in the Journal of Nutrition.

There are two types of inflammation: acute and chronic.

generally, people are most familiar with acute inflammation. This is the redness, warmth, swelling, and pain around tissues and joints that occurs in response to an injury, like when you cut yourself.

When the body is injured, your immune system releases white blood cells to surround and protect the area.

Acute inflammation is how your body fights infections and helps speed up the healing process.

This process works the same if you have a virus like a cold or the flu.

Chronic inflammation, meanwhile, is when inflammation gets turned up too high and lingers for a long time.

At this point, the immune system continues to pump out white blood cells and chemical messengers that prolong the process.

When this happens, white blood cells may end up attacking nearby healthy tissues and organs.

For example, if you are overweight and have more visceral fat cells — the deep type of fat that surrounds your organs — the immune system may see those cells as a threat and attack them with white blood cells.

The longer you are overweight, the longer your body can remain in a state of inflammation.

Research has shown that chronic inflammation is associated with heart disease, diabetes, cancer, arthritis, and bowel diseases like Crohn’s disease and ulcerative colitis.

Symptoms of chronic inflammation are easier to overlook than acute inflammation, however.